Skip to content
With a picture of Lee Harvey Oslwald with a bullet flying to his head the assassinator of John F. Kennedy who was the 35th president of the United States (1961–63), (read a little about #35 below) HoJoe releases a song called “Die Bout It” is this part of the album “Live Bout It Die Bout It” take a listen below.  #35 John F. Kennedy faced a number of foreign crises, especially in Cuba and Berlin, but managed to secure such achievements as the Nuclear Test-Ban Treaty and the Alliance for Progress. He was assassinated while riding in a motorcade in Dallas. He was the youngest man and the first Roman Catholic ever elected to the presidency of the United States. His administration lasted 1,037 days. From the onset he was concerned with foreign affairs. In his memorable inaugural address, he called upon Americans “to bear the burden of a long twilight struggle…against the common enemies of man: tyranny, poverty, disease, and war itself.” He declared: ”In the long history of the world, only a few generations have been granted the role of defending freedom in its hour of maximum danger. I do not shrink from this responsibility—I welcome it.…The energy, the faith, the devotion which we bring to this endeavor will light our country and all who serve it—and the glow from that fire can truly light the world. And so, my fellow Americans: ask not what your country can do for you—ask what you can do for your country.”

Here is video from @nuhbeghojoe instagram of HoJoe x KR.

Another release a week after “Die About It” Here is another song release, HoJoe “Think About It Ft.KR” with a picture of The Greek Freak Giannis Antetokounmpo of the Milwaukee Bucks and Jabari Parker #34 x #12 who at the time are fighting in the first round of the playoffs to beat a short manned Boston Celtics can they pull it together as a team in time with a interim head coach; a returning young star, a rookie of the year and so much promise or will they be eliminated or bask in the glory of winning on the road to a championship it’s wide open, I would think the song exudes some winning! This also leads us to wonder is this song on “Live Bout It Die Bout It” or another project completely. Take a listen below.

“I Drop” from the book “I Of Eyes” man and woman becoming completely one like the birth of a universe. 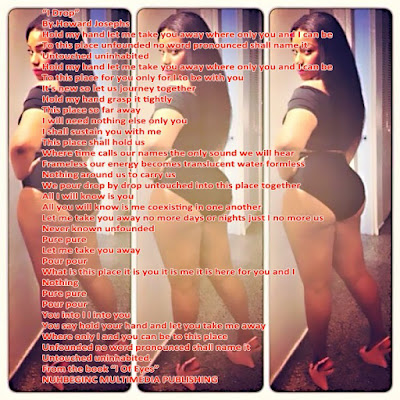